Shadow of the Crystal Palace! I reverse engineered this Call of Cthulhu oneshot from the Critical Role oneshot by the same name, for a game with my wife and her colleagues. Six odd fellows enter into the annual cat exhibition as a way to enter the darkened Crystal Palace museum to find a valuable relic. The more they explore, the more strange things they find...

A great game, even though I only managed to drive one character temporarily insane and everyone made it out alive as the Crystal Palace burned to the ground! Of course, 'everyone' includes an ancient entity now possessing a herd of prize cats and rampaging through the London fog. Still, all the surviving players have earned a free reroll for the next game we'll play.


Movie: map of the Crystal Palace on foamboard, with tiny magnets hidden inside. The Jade Planchette held a piece of flux detector foil: micro-capsules with particles that move in magnetic fields to darken the foil. Too bad that the players didn't discover this in-game, as this would have helped them to find a ton more of wacky items. A great prop idea mentioned in the Critical Role blog about this game's props that I just had to copy!

How on earth did that strange little American know when I was going to burgle his bedroom? The blackmailing scoundrel promises that he'll keep my nightly activities a secret from mama and papa, if I retrieve a certain casket for him from the Crystal Palace exhibition space. Hopefully this won't be a drag. Though the airing of my deepest secret would be detrimental to my good name, and by extension my parents', the tedium of every day life and its endless soirees is worse.

These people with their cats are almost enough to give me apoplexy, and the organiser takes the cake with his monotonous drivel. The tap on my shoulder by the handsome captain Bentley Badger is a welcome reprieve.

Mr Merriweather, and his American accent, greet us - a strange group of people that could only have been gathered by such a strange man. He once again explains the goal of this mission - find a casket made of soapstone with inscriptions - and we move into brief introductions. No time for niceties apparently.

Critical Role's write-up of the characters, my character picker for the players, secret character backgrounds


One player couldn't make it. I turned the last of the six pregen characters into an NPC stuck in the hellish spirit mirror trap that is the Crystal Palace:


The first barrier to be overcome was the guard, my first instinct was to sneak, but the talkative academic (he would not shut up about this pamphlet he had written..what a bore) had the right paperwork and browbeat the poor man with inane babbling. We were quickly let through.

The first thing that is very clear is the lack of any organisation in the Crystal Palace. The place is a mess, and it needs to open soon..wondering if they will make it for opening day. Boxes are everywhere, and there is no system to discern, and the atmosphere is so weird that I think I see ghosts...I'm sure there is someone sitting at the desk in the Babylonian court. Terribly creepy and not at all boring.

We locate the Electrical Arcade and I hunt for the Elekiter. Meanwhile, Ida is jubilant to retrieve her stolen electrical generator.

Under the elekiter - yes I opened the glass show case - I found a puzzle box, and opening it (an easy task) revealed an obsidian mirror. Dr Pocket immediately burst into one of his inane spells of academic babbling at the sight of the mirror. The accompanying text in Japanese (writting by a person from china and translated in to Japanese by what must be a brit) reveals that this mirror "reflects the wish for your safety". The captain manages to find something else in the box, a roman key of sorts - perhaps we will find something in the roman court that can be opened by this key.

Looking into the mirror, I had a glimpse of fingers reaching out..it scared me terribly, I don't know what is going on with me this night.

Our resident spiritualist Mr Septimus Goodfellow - terribly handsome and walks the right circles - briefly inspects the mirror and immediately is asaulted by - what looks like - the ghost of Alexandra O'Neil, she disappeared quite suddenly from the face of the earth. Hopefully she is still alive, she would be a hoot at parties.

Alexandra seemed to be very adamant about us moving to one of the bigger windows in the arcade, and sure enough when we did she appeared there. By breathing fog on the windows and writing on them we were able to communicate with her.

Alexandra: Can you see me? burglary accident - hungry ghosts - need to get an item to Tibet

I immediately try to write something back, the glass however feels very gooey, like I would have little trouble trying to pass through to where Alexandra is, but I steady myself and press on.

us:what item
A: jade planchett
us: where
A: somewhere, looked in all courts

she mimics the size of it, around handsized but she hasn't seen it.

us: how did you get there
A: walked into glass wall or door in the Egyptian court

We need to be wary, if this is indeed real. Part of me hopes we can help her get back to the real world...if indeed this is not some mass hysteria.

The players promise to get Alexandra out of the mirror, but first, their mission! However, in the excitement of the night, nothing comes of the solemn vow.

There is currently no idea in the group where the casket could be, so to the offices we go, in the hope that the right papers are found quickly.

None of our group seems to be able to pick a simple lock. After a bit of pushing and a totally uncalled for comment by Captain Badger - he was clearly informed by his employer on my extracurricular activities - I was able to open the door. Looking for the papers looked like it was going to be a tediuous and terribly soul destroying, thankfully Dr Pocket knew what he was looking for and was quick about it. Ida had much less luck and managed to mess up the papers and was not able to find whatever it was she was looking for; documents to prove that her competitor Jasper Stagwells had entered her electrical generator into the Crystal Palace exhibits under his own name.

Into the Courts again

We quickly move on to the Greek and Roman courts, and indeed a keyhole is found in the roman court and a red stone of power is revealed - cue the good doctor and one of his academic babblings. Septimus senses (very theatrically, how immensely thrilling) that the casket has passed through the Greek court, however no trace is found there.

Septimus is a fucking fraud, and I love how he's milking the creepy atmosphere!

Coming to the Egyptian court tension rises, this is the place that the image of Alexandra claims she disappeared from. We find something that could potentially be such a doorway.

The doctor appears to be mesmerised by the statue of Isis with its head-mounted sun of black glass, however he is roused by the captain and whisked off to check the bazaar for the casket. They come back with the Jade planchette instead, which they find in one of the exhibition cases around the fountain area. 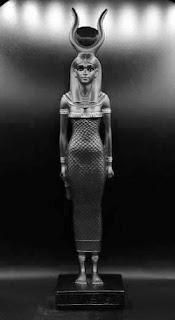 There seems to be a strange attractive force between the planchette and the obsidian sun on top of the Isis statue. Septimus takes a closer look but is not immediately forthcoming with what he sees. (later he confided that he saw the most disturbing thing of gathered people that wanted to come through to our reality, a hungry people that meant to do bad things once set free)

Lucky fuckers that they are, the players avoid my nudging to steal the obsidian mirror. I'd have had it shatter and unleash a sea of shadow ghosts on them from any shadow in the darkened building.

We continue our search for the casket and eventually find it in the Nineveh court. Between the stacks of cats, all looking at us with their eerie glowing eyes, we finally found the Casket we'd been looking for! I wanted to get the casket back to Merriweather very quickly, but my curiosity got the better of me. I could not resist to open the lid of the casket, it was almost like it wanted me to.

A big cloud of mummy dust spews out of the casket and envelops us before moving to the cats who inhale it. The cats high on the mummy dust go literally insane and try to claw their way out of their cages. I have never seen anything like it, and it highly motivated me to get the casket out of the museum and back to Merriweather. This is most definitely not boring.

We tried to get the casket out, but the cats are organising and try to get our lights. We are attacked and I have sustained some heavy scratches. Badger throws down his lantern and sure enough, the wooden floor catches fire.

First cats, now smoke and soot. This dress is done for.

Make for the exit!

When they attack Septimus, who carries the light, captain Badger finally showed the skill of the army man he is and fights them off with the sword that was originally his cane - what an exciting piece of weaponry. Dr Pocket and me are carrying the casket, but I trip, damn these shoes. With a feat of immense strength the doctor carries the casket out of the Nineveh court by himself. Very impressive.

We make a beeline for the guard post and the exit that has the coach - hopefully - ready for us. The guard post is empty, and strangely enough it looks like the guard left his post quite abruptly.

The immediacy of the cats prowling around us, just out of sight, in the shadows makes us run even faster. However seeing the guard standing just ahead looking out of the window like nothing is happening startles us. What is more, he does not appear to have a reflection in the very window he is looking out of. It is very unnerving.

Our exit door is locked, but with a little luck I manage to open it. What would they have done without me? The promised coach was indeed there, we deliver the casket and the driver takes all of us back to a location of our choosing.. Time for a stiff drink and some time to put this behind me. It was not boring, but I'll be glad if I never have to go through such an ordeal ever again.

In hindsight, I overestimated both the size of the elekiter, and the opportunity to return to the electric arcade...circumstances arose, as they say. Fortunately the museum burned down for the most part and thus no one will have the elekiter. And the favor for Mr Merriweather means my secret identity is still safe. All in all, a good night!
Posted by Oorlof at 21:40