Chase scenes are about outwitting and outrunning your opponent. They should be frantic, vivd, fast-paced. And everybody in the group should be able to contribute. I want to run this off the cuff, which means I don't want to micro-manage and plan out every last little obstacle, juggle movement speeds per character, initiative, opportunity attacks and so on.


I'll run chases as extended opposed skill checks. Yes, it's a reviled D&D 4e mechanic, yes we'll make it work anyway. My goal is a fast movie montage of cool situations and quick decisions, not endless fiddling with modifiers. I also want variety in the challenges; not just comparing movement speeds, but throwing up situations for the players to navigate in (hopefully) new and exciting ways. I'm choosing a system that treats a group of chasers or runners as one single entity, so that I don't have the hassle of tracking how far ahead each individual is. Speed over detail here.

Night's Black Agents has a perfect little system - I only needed to file off the serial numbers and write up a bunch of obstacles. Rules first, obstacles and persistent conditions at the bottom of the post. This is written for a 5e game in a lowish-magic setting like the City of Lankhmar. In a place with a lot of low level magic like Eberron, spice things up with feather fall tokens, boots of jumping and so on.

Optional rules for those who like more crunch are in italics. They can mostly be used independent of each other. 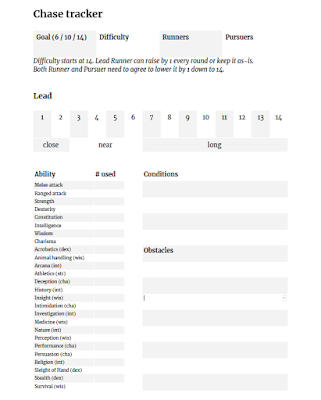 Set-up. Runners are the people trying to get away, Chasers are the ones trying to catch them. You track the distance between the two groups in an abstract way using the Lead stat. Runners need to reach a certain Lead to escape, Runners want to reduce that Lead to 0.


Lead and Obstacles. The way you change Lead is by going through Obstacles; quick little situations you can navigate in a ton of different ways. Select Obstacles in advance or roll them as you go. Be prepared for a chase to hit the rooftops, sewers, water etc - I've included slightly longer lists for those environments.

The Runner starts with a Lead halfway to their Target, depending on the overall terrain:


Have the group pick a leader for the round and let them describe their approach. Each group moves as one close-packed group. Every round, another player heads each group and rolls a skill check to try and overcome the Obstacle.

Roll-off. Best roll changes Lead in that group's favor. Describe the results of the rolls, tell your players how close they are to catching or escaping their opponents, and go for the next Obstacle. If the chase is heading in a particular direction (you need to reach the boat / catch the cultist before they reach their safe house), mention how close you're getting.

Pick an Obstacle. Describe quickly what the group sees - this is all happening on the run. First impressions, one big hit of flavor, then boom: who takes point? What do you do?

You'll get questions from your group. Fine, use those to flesh out the scene. Try to keep that to under one minute though, this is about keeping a frantic pace.

Have the head Runner for the group describe their approach and pick a skill for it, then the same for the Pursuers. Describe results: this is going to be chaotic, lean into that. Reward crazy ideas with cool descriptions, then on to the next Obstacle!

Ideally, Obstacles are situations that the players can decide to tackle in lots of different ways, not a straightjacket to which there is only one answer. So, "You run into an alley full of street food vendors, with drunks and hot grease everywhere - what do you do?", instead of "there's a closed fence - roll for lock picking!")

My advice is to pick or roll a bunch of Obstacles ahead of time so you can keep up the pace during the chase without having to consult tables all the time. Of course if your group decides to head for the roof tops / into the sewers / back to the streets, you'll need to find appropriate new Obstacles, but it pays to have some pre-selected.


Only recommended if you've got the basic Chase rhythm down.

FINALLY, shit to pepper your chase with. Either plan these out ahead of time (so you can foreshadow) or roll as you go along. Sewers and rooftops have longer lists, because face it, your players will go there first chance they get.

When either Pursuers or Runners roll a 1 on their skill check, inflict an ongoing Condition on everyone. If a party rolls a 20, they can choose to end one condition.

Every condition inflicts an ongoing problem on the Runners and Pursuers. The lead character in every group rolls a check against Difficulty every round or the group suffers the effects of one of these ongoing conditions:

Belswick 21: a mess of their own making

Super quick recap, because I have a lot on my plate (such as running not 1 but maybe 2 more campaigns on the side!)

In the middle of winter, the party returned to clear out the last areas of the Tomb of the Serpent Kings, only to find that a bunch of bandits had taken up residence. The highwayman Brent, spared by the party before, had apparantly found the fungal cloning device in the dungeon and used it to make many, many moronic copies of himself...

(Yes, previous decisions by the party matter - and they can even fuel a restock of a mostly explored dungeon! Oh, the joy on my players' faces. Or was that deep resentment? Secure your sites kids, you don't want squatters moving in after you worked hard to clear a dungeon.)

Shams the Dwarf fighter and Guy the Divinernow a Psion combine earthshaking magic and telekinetic might to collapse a secondary entrance tunnel to the Tomb. Good thinking, now the Brents can't sneak up on them from behind!

Too bad that I didn't get to collapse that trapped tunnel on the party myself, but so it goes.

Lomin the Elf rogue scouts ahead with Shams' imp familiar Ricky (who has been furiously taking notes and muttering "outsider! outsider!" at Guy's sudden psionic displays). It turns out the Dwarf/Man-made earth tremor knocked out the roof to a large underground chamber; a new exit to the tomb! (Area 11, if you have this excellent free module)

Taking the main entrance on top of the hill, the group is surprised by a viscous black ooze dropping from a slamming ceiling trap and a vicious skeleton with a dreadful axe. (Area 5, with the black pudding and from areas 13 and 14: they were accidentally freed by the Brents and set up an ambush here.)

Lomin's brilliant longsword, the Torch of Saint Kurelda, speaks in his head: it is eager to vanquish the undead menace! The elf immediately starts pounding the horror. Morti the artificer cleaves into the black pudding, but sadly it doesn't make a dent - in fact, it causes the pudding to split into four! Morti and Shams valliantly fight the oozing monstrosities, but the thing's acid seeps into their armor and brings Shams to the brink of death. Her shield is ruined, she sports horrifying acid burns and just resists being blinded.

I love me that Death & Dismemberment table.

Tilly the priest/bard/warlock is making himself useful by throwing bolts of divine radiance and spell-sounding death's bell for the skeleton, as Guy holes up in a side tunnel and takes pot shots. When both enemies are down, the party picks up the berserk skeleton's axe...to have it hum with pleasure at such carnage. Say high to Meatcleaver!

Meatcleaver: cruel semi-sentient greataxe +1, attunement necessary. On a crit, Meatcleaver inflicts a wound from the Death & Dismemberment table (use damage -10 to find the wound).

ll this noise has attracted the attention of the Brent bandit group. As the party tends to Shams' and Morti's wounds, Tilly sneaks out, magically disguises himself as a Brent and links up with a pair of the bandits that was outside hunting when the attack began.

Other Brents are climbing out of the new exit/entrance over area 11, and Tilly finds himself being interrogated by a smarter and stronger version of the baseline copies. He almost gives away the game when he gives an answer in perfect grammar, but his Deception skill holds. As the band sneaks to the main entrance, the leader-Brent instructs Tilly to go get reinforcements. No such thing happens of course.

The Brents try to parlay and ask what it would take the party to leave them alone, but Lomin claims first dibs on the entire site and wants them out. He follows up with killer arrow shots, as Tilly-disguised-as-Brent takes out hidden Brents with Toll the Dead-cantrips and superpowered Inflict Wounds spells. The leader-Brent takes a couple of hefty sneak attacks and overclocked spells to put down, but in the end all of the bandits lay in the snow,  reverting to their fungal origins.

The party makes camp in rooms 3 and 4 and sets a watch. Tilly sneaks back to the collapse over area 11. A couple of brents, a leader-type Brent and an even-huger BRENT watch on as the silvetongued asshole soothingly talks at them - and matter-of-factly pulls up the rope down into the room. Just then the moonlight hits him, his disguise spell fades, and a chorus of impotent rage sounds from the earth.


Gods, next session is going to be cathartic. Whether for the Brents or for the players I don't know, but I expect people to cathartic their guts all over the place :D
Posted by Oorlof at 15:13 No comments: