New meat for the grinder

So your guy is now Wyvern dung, polymorphed into a frog, smeared all over the landscape by a landing dragon, or just dies of infection from a Kobold trap. (lol) If raising the dead is not in the cards, you'll need a new character to keep playing. Your options: start a completely new character, promote a sidekick, or roll up a guy to be the heir of your PC.


Inspired by / stolen from: Jeff Rients. Of course.

Completely new characters will be made like starting PCs, with just enough XP to be two levels lower than the original PC, and only basic gear. A new PC can join the party immediately if the player desires. If the original PC did not specify an heir, his belongings can be claimed by the rest of the party.

You may play an heir to the dead PC and be entitled to the old PC’s non-magical treasure (minus a 10% inheritance tax) and one magic item of the player’s choosing. However, the heir can only join the party when it returns to civilization or at the start of the next session. Heirs must be of the same race as the deceased, and will be 2 levels lower than the original character, with only basic gear.

Finally, you may immediately promote a henchman to full PC status, with stats and gear like an heir. Henchmen dig down and find undiscovered strength; they rise from their own basic abilities to 2 levels lower than the original PC and can continue to level afterwards. If the original PC is de-digested, unpetrified or revived, the henchman will either revert to his original abilities, or strike out on his own. If a will exists (up to the player), the henchman can gain treasure and one item just an heir (above).

Bring back the body

When an adventurer dies and the party is unable (or unwilling!) to have them raised from the dead, an heir or promoted henchman (see above) may choose to give the corpse a Heroic Sendoff. This requires at least 24 hours and something cool like a bigass funeral pyre, the raising of a burial mound, or a funeral ship floated down the river. The corpse must be armed and armored for combat, as appropriate to the class of the character. 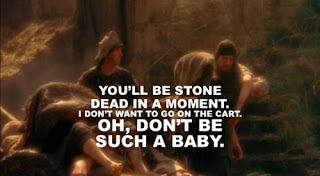 If the heir or promoted henchman donates all their non-magical treasure to the deceased as grave goods, they immediately gain another level (now 1 level lower than the original PC). If they also donate a magic item inherited from the PC, they rise to the start of the original PC's level. (No magic item to donate: no level.)

Other party members may donate up to 100gp times the level of the stiff as additional grave goods, with the amount being spent converted to bonus XP for the donor. Each party member may also donate one magic item to the grave. Scrolls, potions, wands and other one-shot items net a bonus of 250xp, while more permanent items get you 1,000xp. Magic items unusable by the deceased do not count.
Posted by Oorlof at 16:14